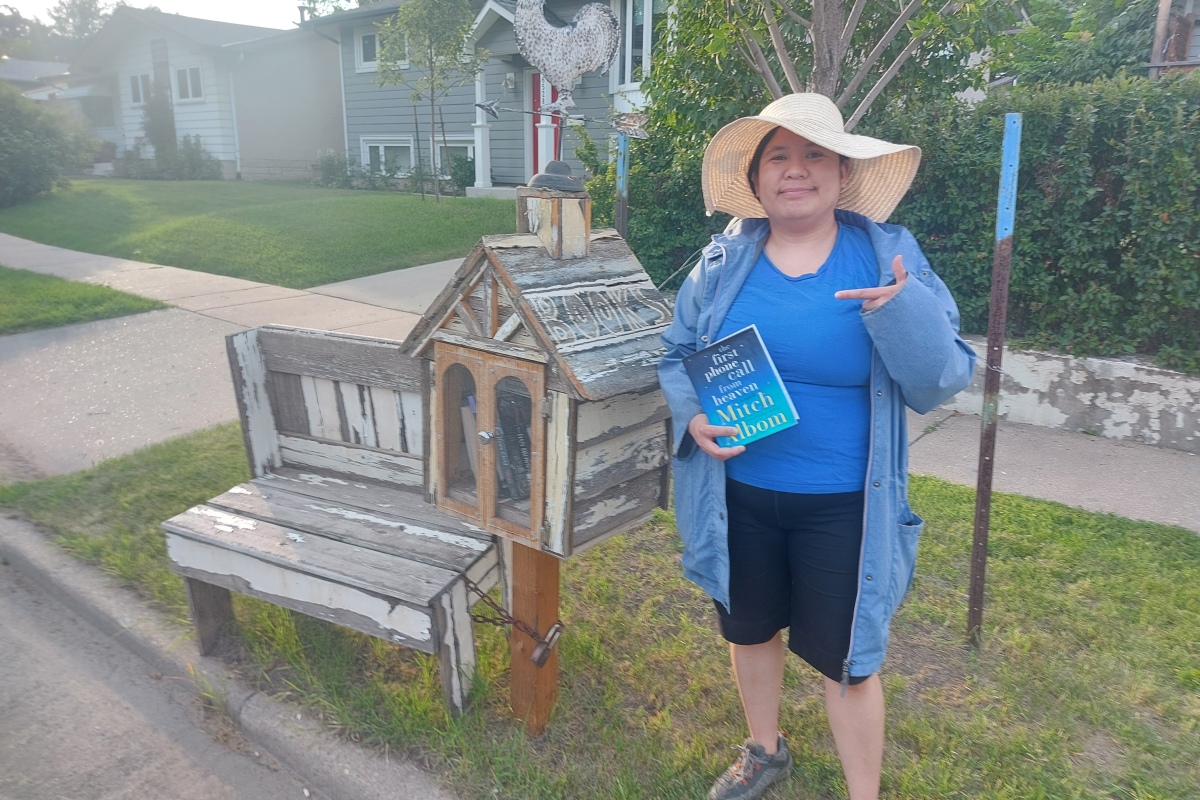 It may sound silly but yes, I am writing a thank you letter to an object, which is the Little Free Library in a neighbourhood that was a 20 minute walk from my home. These are my thoughts after reading a book I got from it, “The First Phone Call From Heaven” by Mitch Albom.

Dear little Free Library. I think you’re pretty new, I haven’t seen you before the moment I saw this particular book that caught my attention. Overall, I’m a fan of this particular author, thinking back when I first saw a book written by him titles The Five People You Meet in Heaven.

I have also read another book by him titled Tuesdays with Morrie. So, I have an idea of what to expect in his books. There will be an overall theme of wholeheartedness and inspiration. There will be undertones of religion and spirituality. There will be themes about love and loss and death. And upon reading this book, I was not disappointed. That’s exactly what’s in it.

The premise of this book is about a pilot who is grieving the death of his wife, and missing opportunities to support his family since he was in prison due to criminal charges put forward from a plane crash. He returned to the small town where he grew up where a seemingly mysterious series of events started to occur. Several people in the small town started to receive what they claim were phone calls from dead loved ones claiming that they are from heaven. Alongside the struggles of this pilot, there was a journalist from out of town assigned to cover this story. As word of this seemingly miraculous and extraordinary event spread across the world, the town was whipped into a frenzy.

I will try not to give out too many spoilers, but all I can say is that answers were discovered behind how the phone calls were happening, and for many of the people affected, it resulted into profound effects that changed their outlook in life and family. It talks about how people’s lives are interconnected in numerous, often unexpected ways, and sometimes, people’s actions affect us in ways that we might never know, for better or worse.

For me personally, what affected me most about the book is not about the moral or the plot or the writing. I mean, it is pretty good, and I enjoyed reading it.

What I found moving and striking is an experience that is first for me, to have a character with my name in a fiction book. On top of that, for the character, Giselle, to be the dead wife that the protagonist is still grieving about! There’s no need to imagine or daydream this time in order to relate to a character – the book’s writing made it very direct, very explicit.

I am married to a man I love very much. I also struggle with suicidal ideation. While I haven’t actively done things to end my life in recent years, my heart continues to feel heavy with what is described as survivor’s guilt. Many a time I have daydreamed about what would happen when my life ends, if it ends soon. The fact that in just a few years, I’m reaching my mother’s age when she died, when she died saving me, is not helping matters.

But in this book, I was confronted with an experience I haven’t had before. Seeing the words of a grieving husband, who continued to say how much he loves and misses his wife, Giselle. The anger and pain of someone who missed her funeral because he was in prison, with undertones of helplessness and despair as he adjusts to the life of being a single parent for their little boy. This time around, there’s no need for me to wonder, ‘what would my own husband say or think, in the days, weeks or months just after my death?’ In many ways, words and thoughts could very much be his.

How has this affected my suicidal ideation? Words cannot express, but there is something that fundamentally shifted there.

After reading the book, I saw on the inside of the back cover, that there’s a sticker, one of those customized labels with people’s name and address so they can easily put it in outgoing mail. This book, at one point, was owned by a woman named Marilyn. The address is in Edmonton, but it is not in the Patricia Heights neighbourhood. Still on the west end, but a few neighbourhoods north.

Little Free Library by the end row of houses in the Patricia Heights neighbourhood: you have presented me with a unique experience and a profound gift. I’m still processing it, frankly speaking.

For now, all I can say is “thank you” and “wow”. The collection of Little Free Libraries for the neighbourhood is still growing, as well as all over the city. I wish that you continue to house and share books, knowledge and joy for years to come.